Why can’t sailing instructions just say what they mean and mean what they say?  If the sailors know what the race committee means to say, but they haven’t said what they mean, then what are the rules?  What the RC means?  Or what the Sailing Instructions say?  Of course, it has to be what the Regatta’s SI’s  say.  But when the RC can’t say what they mean, it frequently follows that is the SI’s are confusing, incomplete, self-contradictory, or just nonsensical.

The Sailing Instructions at a recent regatta I attended describe the start and the finish lines and then add this sentence in bold typeface:  “Before and After starting, Yachts shall respect the starting and finishing lines except when in the process of starting of finishing.”  (Capitalizations are theirs.)

One of the course diagrams is the following: 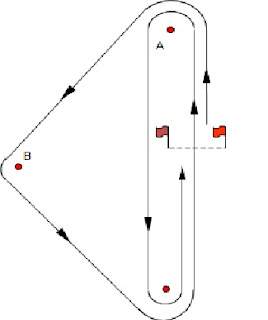 I think this is all an attempt to say that the start/finish line is closed. “Closed”  is a commonly used expression meaning that boats racing cannot cross it when heading from one mark of the course to the next mark of the course. Closed lines are used for two reasons.  One is to make things easier for the scorer; when a boat crosses the line, write down the number; the boat is finished.  (Of course when that boat crosses the line again, someone has to sort it all out.)  The other is to minimize the interference of boats sailing in different fleets or on different legs of the same course.

Given that this instruction was written for a situation where up to 4 fleets would be on the same course, I think it is safe to say that there was an appropriate concern for interference between fleets.  My opinion is that careful spacing of the starts and the use of courses that separate fleets are far more effective tools to accomplish the goal, but many also use a closed line as a tool.  Even a closed line does not guarantee boats will not interfere with each other, but it should reduce it.  (For the regatta in question, the RC very successfully spaced the starts so there was never anything remotely like interference in the vicinity of the start/finish line.)

Although the goal of minimal interference is noble, and the closed line is a tool for accomplishing the goal, the Sailing Instructions still need to say exactly what is intended and prevent any unforeseen consequences.  Dick Rose does a great job of explaining all the possible unintended consequences and proposing sailing instruction wording to avoid them. Just for fun, let’s look carefully at what these particular Sailing Instructions say and the problems they could cause:

First, there are the problems with closed lines that Dick Rose points out.
e.g. A boat who believes she is OCS, but is not, and returns to the line has broken the rule.  The line actually becomes an obstruction for sailors except at a start or finish.  However, because safety is not involved, a boat cannot hail for room to tack at this obstruction, somewhat changing the RRS and possible racing tactics.

Then, “Before and after starting” means at all times except at the exact instant of starting.  This includes sailing in the prestart, sailing the course after the start, and all the time before racing, after racing and in between races – virtually the entire day.  Let’s just replace the phrase with “at all times.”  By making this provision in force at all times, any boat that crosses the line while sailing around in between races should be disqualified.  But in which race does the DSQ apply, the prior one or the next one?  This prohibition could apply even if no races are currently in progress.  Do they really mean this?  Could I have protested every boat that did this?  (I could have been the only boat left!)  A boat protested for this would have no way to exonerate herself, because it is not a Part 2 rule.

Next, the word “respect” seems very peculiar, and I can’t recall seeing it used in a sailing context before.  “Respect” is certainly not a term defined in the RRS, so standard dictionary definitions apply.  The first definition in my Oxford dictionary (verb) is “regard with deference, esteem or honor.”  Should we salute the line?  The second and closer definition is “avoiding interfering with, harming, degrading, insulting, injuring or interrupting.”  Okay, it looks like non-interference is the point.  But must we respect the line, not the boats?  Is it supposed to mean “don’t cross the line” or “don’t interfere with starters and finishers?” If the intent is the first, why not just use the word ”cross”, instead of respect, like everyone else does?  If the intent is the latter, the rules become very problematic.  Would avoiding a starter or finisher override the RRS?  Imagine a starboard boat having to keep clear of a port boat.  Do they really mean this?

And the pièce de résistance is the combination of this peculiar wording with the course diagram above.  The diagram shows the second windward leg passing through the starting line in direct contradiction to what I think was intended.  This could have mattered in our regatta.  In one race, the first place boat informed the second place boat that the line was closed.  Both went around the line.  I was in third, didn’t hear and went right through the line.  Had I been disqualified, which I wasn’t, could I claim that I sailed the course as diagrammed and the other boats failed to do so, resulting in their disqualification and my reinstatement?

In the regatta having these SI’s, I sailed over the start line …… I was not disqualified.  Why?  Was it because I saluted the line as I went through it or because I didn’t interfere with any starter or finishers?  Perhaps the use of the word “respect” was a clever way to leave the line open except when there could be interference with starters or finishers.  Probably it was because the RC was not keeping a close eye out for enforcing the rule at times when a closed line was completely unnecessary.   Why would the RC even think about it with boats spread out all over the course and no one interfering with anyone else?  Seems to me that selective enforcement, which creates a fundamental problem with any rule, could be a frequent result.

In general, I hate the whole idea of a closed line.  As we see here and in the Dick Rose article, it is difficult to write the SI’s to say what needs to be said.  It is too easy to create a rules disaster that may have no good resolution, and so it is too easy to cause selective enforcement.

I don’t like the idea of adding an obstruction in the middle of the race course.  Usually it forces an early commitment to picking one side or the other, not allowing the sailors to play shifts and puffs for a certain period of the race.

And I think it is unnecessary.  It is the least effective of the available tools in preventing fleet interference.  Timing the starts correctly works very well.  If the RC makes a mistake, it can always abandon a starting sequence and start a new one when traffic clears.  Using courses that separate fleets also works extremely well.   Trapezoid courses and box shaped courses have separate windward- leeward legs so fleets do not run into each other.  My yacht club is using these course with great success; never any interference.

But if you insist on a closed line, for heaven’s sake, please write the Sailing Instructions properly and communicate clearly with the sailors.